Ichika Tachibana (橘 一夏 Tachibana Ichika) is a 14-year-old Japanese middle school student living in Kamakura who discovers on the day before summer holiday that a gift from her tutor is much more than a good-luck charm.

Ichika is honest and polite to everyone, including her own parents, who always tries to do the right thing and she detests lying, especially if she finds herself doing it. As a result, her friends often playfully tease her for being straight-laced. Ichika is easily scared, and the thought of ghosts terrifies her, especially when she first sees Manatsu Kuroki in a mirror they find in the school's oldest building.

Ichika meets Manatsu Kuroki on the first day of summer break when she drops her phone in the old school building and has to go back to get it. Since then, Manatsu has introduced to her the power of the Djinn, or Gods/Spirits, telling her it was her summer homework. As Ichika unlocks more and more of the Djinn powers, she begins to realize things about herself and loses her innocence. She begins to lie more and develops a hatred for society, causing her to unintentionally use the Djinn's powers for bad. The powers have even caused her to nearly commit murder. When she realizes she can't throw away the charm, she almost attempts suicide, causing both her and Manatsu to be put in danger.

Manatsu and Ichika share a close bond, not only from Manatsu giving Ichika the Djinn's power but also a close friendship. Manatsu is the polar opposite of Ichika in terms of personality but they do share some similarities. (Such as their fear of ghosts.) But they balance each other out.

As Ichika unlocks more of the Djinn's powers, she begins to blame Manatsu for the horrible things that are happening around her. She gets mad at Manatsu quite often over the fact that her eyes have started to glow and that she has nearly caused pain to many people.

It is revealed that Manatsu was actually in love with Ichika and wanted her to be safe. She even blamed herself for putting Ichika though the pain of the trial. She nearly sacrificed herself for Ichika many times, such as when Ichika nearly commited suicide but saved her.

In the end, it is shown that Ichika really did care for Manatsu and treasured ther friendship. She even hopes to see her again after Manatsu returns to the mirror fragment. When they finally do six months later, Ichika is overjoyed that they get to spend time together again and is very sad when she has to see her go for the last time.

Ichika respects Satsuki quite a bit and is actually a little protective of her. When Satsuki had strayed away from the group to find another friend, Ichika was immediately worried and used the power of the Djinn to find her quickly. As soon as she did, she went to Satsuki and silently comforted her friend who had just had her heart broken. Ichika and Satsuki are close from a distance, they care about each other but it is not shown that they are exceptionally close if they are.

Ichika finds Keiko to be interesting. She isn't intimidated by her family's status and worries about her when the boy she likes dumps her for someone else. They go to a shrine in which they encounter the boy with his new girlfriend, this causes Ichika to get angry and take the power of the Djinn to make the power go out everywhere before she came back to her senses.

Ichika is fascinated that Michuru can see things. She also wonders what it is she sees, especially when it comes to Manatsu Kuroki. Ichika comes off as almost intimidated by her friend in some situations but does in fact, treasure their friendship. Ichika was affected by Michiru's words when Ichika was losing herself from the powers of the Djinn and it ultimately saved her from dying.

Sei is Ichika's grammar, literature and social studies tutors and friend who is older than her, but they have grown close. Ichika actually has developed a crush on Sei, but she is heartbroken when she sees Sei and Saya Kogure talking and wonders if they're dating, even though she doesn't actually know the truth of the situation.

Ichika has treasured every gift he has given her and really treasures having him in her life.

Kai is Ichika's math and science tutor. Just like how she had gotten close to Sei, she's grown quite close to Kai as well, although she really looks up to him, she doesn't harbor romantic feelings for him. She also ends up noticing that he is similar to Manatsu Kuroki in many ways but she can't really explain it.

Ichika looks up to her as a beauty and someone successful when they first meet. As the story continues though, Ichika views her as a rival (first for Sei Tōdō's affection and then because o the charm). Ichika is angered when she sees that Saya had turned Sei into stone. In the end though, she doesn't fully blame her for the incidents involving the charm and is actually a little bit thankful for the journey she went through and for the fact that she never would have met Manatsu if it hadn't have been for her. 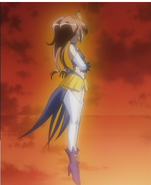 Lightning Djinn
Add a photo to this gallery

Add a photo to this gallery
Retrieved from "https://uta-kata.fandom.com/wiki/Ichika_Tachibana?oldid=4204"
Community content is available under CC-BY-SA unless otherwise noted.